Dedicated to my father - an amazing husband, father...man! 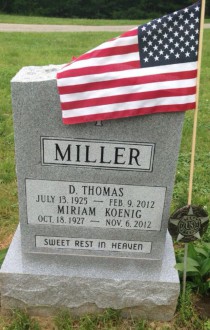 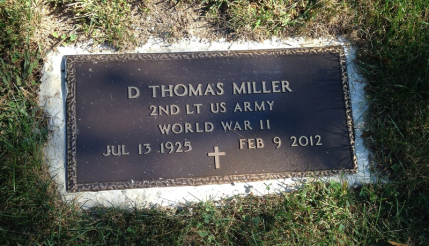 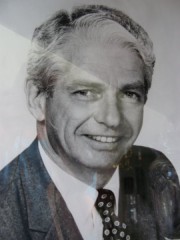 D. Thomas Miller, who was President of the CBS Television Stations Division in the 1970s, passed away on February 9, 2012, in Cohasset, Massachusetts. He was 86.

Tom Miller was born July 13, 1925 in Chicago, Illinois. He was the second oldest of five boys of William Henry Miller and Doris Marie (Jones) Miller. He graduated from Chicago’s St. George High School in 1943, passed on an opportunity to play football at the University of Colorado, and entered the military. During World War II, Mr. Miller served as a Navigator Bombardier in the U.S. Army Air Forces in the rank of Second Lieutenant. While on a training flight, he witnessed the only testing of the Atomic Bomb at Alamagorda, New Mexico, prior to the bombings of Hiroshima and Nagasaki. Following the war, Mr. Miller attended Loyola University in Chicago, receiving his undergraduate degree in 1950. He also did post-graduate work at University of Chicago from 1950-51.

Mr. Miller started his career in broadcasting as an assistant research director at ABC Radio & Television, and held positions at the CBS Television Network, Harrington Righter & Parsons, and ABC-TV during the golden days of the television industry. He rose to General Manager of WLS-TV in Chicago from 1963-66. Mr. Miller rejoined CBS in 1967, accepting a position as Vice President of Broadcasting for the New York Yankees when the network owned the team. In 1968, he was named Vice President and Assistant to the President, CBS Broadcast Group. In 1970, Mr. Miller became the President of the CBS Television Stations Division. It was in this position that he met Jim Henson and was instrumental in launching and producing “The Muppet Show.” He continued his career at the CBS Broadcast Group as Vice President, Technical Resources from 1977-79, and as Vice President, New Ventures from 1979-85.

Mr. Miller was a high school football player and track star. On a lark, a friend and he tried out for the New York Yankees, who then offered Mr. Miller a minor league contract. As a young man in Chicago, he was the drummer and manager of the Johnny Miller Orchestra. Mr. Miller was an avid skier. Once, Stein Erickson approached him about teaching skiing in Chile. He was also a lifelong golfer and belonged to the Winged Foot Golf Club and the Siwanoy Country Club.

He was the beloved husband of Miriam T. (Koenig), and the loving father of Thomas D. Miller and his wife, Pamela of Fairfax, VA., William H. Miller of Aspen, Co., Mary M. Ernst and her husband, Robert C. of Cohasset, Jill A. Miller of Greenwich, CT., and Lawrence K. Miller and his wife Lisa of Glen Ridge, NJ. He was the brother of the late William, John, James, and Robert, and was the beloved grandfather of Thomas Miller Jr., Christopher Miller, Catherine Miller, Gregory Ernst, Michael Ernst, Catherine Ernst, Peter Ernst, Luke Ernst, Maggie Ernst, Taylor Miller and Peyton Miller.

A Funeral Mass was celebrated on Thursday, Feb. 16, 2012 at 11 am in St. Anthony Church, Cohasset, MA.  Internment at Beechwood Cemetery, Cohasset. For an online guestbook, please visit www.mcnamara-sparrell.com 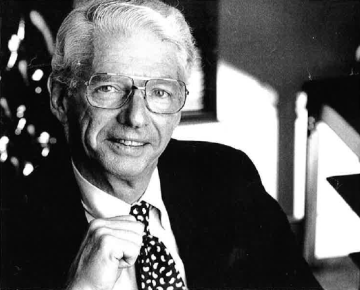 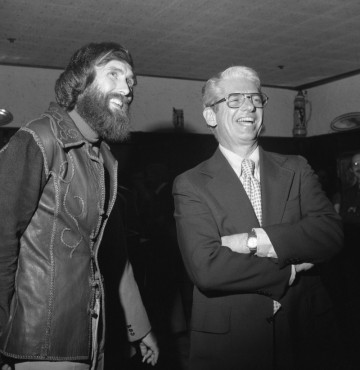 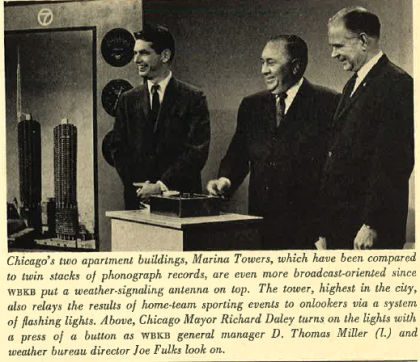 During the Golden Age of television in the 1950's while working at the Chicago ABC affiliate as a young research executive, my father was in the defintive late night meetng where they literally made-up the demographic breaks (e.g., A18-49, A25-54, M18-24, W18-34, A55+, etc.). ABC was a struggling new network with a young audience so they created the demographic age-breaks we know today to convince advertisers to feed the franchise by targeting their 18-49 viewership to distinguish ABC from the more established 'Tiffany Network' CBS and NBC.

Do you remember The Gong Show?

In 1975 the leading executive producer of game shows, Chuck Bariss (The Dating Game, The Newlywed Game) came into my father's office at CBS and proceeded to jump on the coffee table, dance around and gesticulate his idea for a crazy amateur talent contest, called The Gong Show. Alex was a renowned stoner, so you can can pretty much image the scene. (And if you don't know or can't remember peep the clip below.) My father said "take it to ABC...they'll love it!" It ended up on NBC. 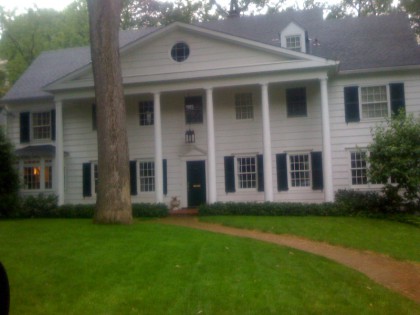 Here's where Dood raised me and my mom and my brothers and sisters (and dogs, cats, rabbits, birds, hamsters, mice, guinea pigs, frogs, turtles, etc.) 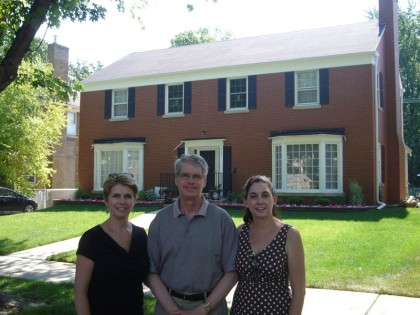 One brother and two sisters in front of my first house, Chicago, IL. 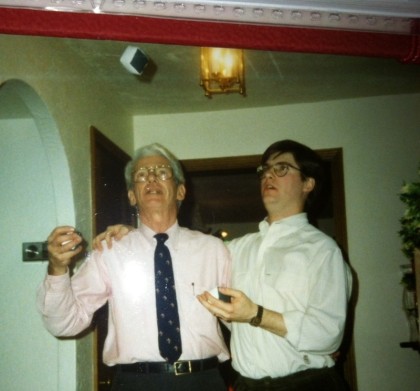 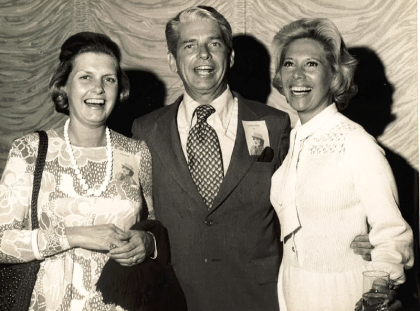 Muz and Dood with their dear friend Dinah Shore

I've come up to visit my mom and give my sister Mary a respite from taking care of her. (Someone needs to sleep with Muz to help her up in the middle of the night if she needs to use the bathroom.)  So it's 4:30am and she's up for the second time that night and upon returning to bed, she turns into Chatty Cathy - reminiscing about her youth.  One story I had never heard before was how my father had asked her to marry him.....

During a break in a dance at a beachside hotel on Lake Michigan in Chicago, the two of them walked out toward the water and sat down in the sand.  My father slowly put his arm around her and quietly asked: "Will you marry me?"  My mother hesitated and then replied: "I'm not ready" and then waited for a moment before adding "I'm ready now."  How adorable is that!?! 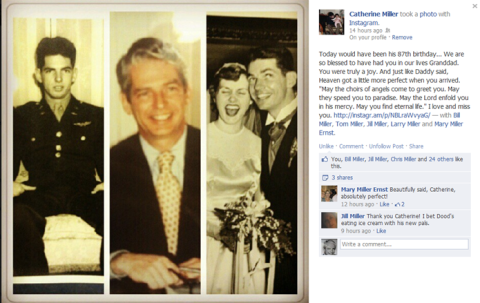 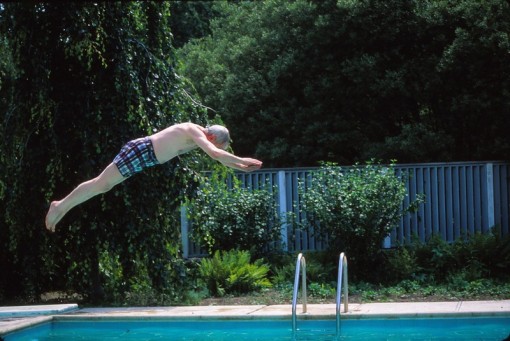 Even the Russian judge gave him a "10"

Since I took a left and moved out to the coast
From time to time I find myself engrossed
With other erstwhile denizens of the apple
While we sit around and take L.A. to task
There's a question someone's bound to ask
And with this complex question we must grapple

Do you miss New York
The anger, the action
Does this laid back lifestyle
Lack a certain satisfaction

Do you miss the pace
The rat race, the racket
And if you had to face it now
Do you still think you could hack it

When you're back in town
For a quick look around, how is it
Does it feel like home
Or just another nice place to visit

Do you miss the strain
The traffic, the tension
Do you view your new terrain
With a touch of condescension

Do you miss the scene
The frenzy, the faces
Did you trade the whole parade
For a pair of parking places

"Do You Miss New York" lyrics by Rosemary Clooney