"Doing business without advertising is like winking at a pretty girl in the dark;

You know what you are doing, but nobody else does."

Advertising is a form of communication used to persuade an audience (viewers, readers or listeners) to take some action with respect to products, ideas, or services.

...or if you're a cynical anti-capitalist: Manipulating the minds of Americans through the dissemination of corporate propaganda.  :D 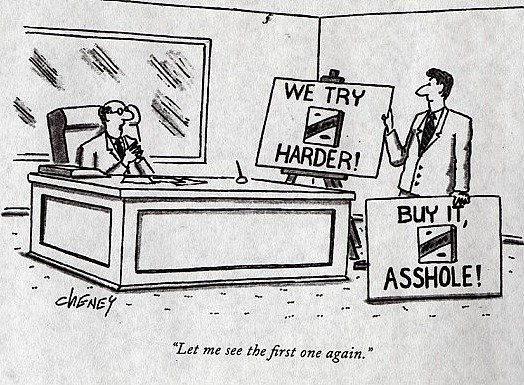 As consumers watch more and more video on more and more devices, multi-screen measurement becoe increasing important. The shift in video consumption habits will underpin a move away from traditional methods of measuring viewership and toward metrics that include more media channels.

Therefore, it's safe to not say we need to move away from transacting on GRPs and toward an impression-based model. GRPs are an estimate of potential reach and do not survive in an one-to-one impression-based measurement world.

P.S. And don't get me started on the Metheringham formula!

Myth: Magazines help me build my brand, but are not key to drive purchase intent.

Magazine Advertising is an effective form of "image branding" your business or targeting a specific audience though trade magazines.

Reality: Magazines perform best overall across the purchase funnel based on 52 client-commissioned studies.

Reality: Readership for adults18–34 continues to be strong.

Reality: Video on magazine websites led in driving consumer visits to a store and to a company’s site.

Myth: Online is the only medium with growing reach.

Reality: Magazine users have grown over the past five years at a higher rate than users of all other media except online.

Magazines are the most consistent medium in driving purchasing results

Magazines target efficiently: With a range of titles that appeal to specific demographics, lifestyles and interests, advertisers can hone in on the targets that fit their needs.

Magazines sell: Multiple studies have demonstrated that allocating more money to magazines in the media mix improves marketing and advertising ROI (return on investment) across a broad range of product categories.

Magazines provide reach - faster than you might think: The average magazine consumes almost two-thirds of its audience within a month's time.

There is constant talk of engagement in print media circles, while at the same time the digital world is now obsessed with "Likes."  Print, arguably the most measured, researched and audited medium, is having a hard time proving its value to marketers who are intrigued by the immediacy and quantitative benefits of digital.  (Just becasue you can count it, doesn't mean it's working.)  Single copy newsstand purchasers and paid subscribers to magazines vote with their wallets and should be valued for their proven engagement - not to mention the credibility and high journalistic standards demanded of its writers, editors and experts.

According to Felix Salmon of Reuters, "It's a known fact in advertising circles that only idiots click on ads -- and yet advertisers still think that click-through rates mean something, and that a higher click-through rate means a better ad. It's the measurement fallacy: People tend to think that what they can measure is what they want, just because they can measure it. And it's endemic in the online advertising industry."

Okay people, it's the year 2012 in the Gregorian calendar and we are still quoting rates in gross (includes 15% agency commission).  These rates and their rationale are antiquated.  The original 15% was paid to "agents" who worked on behalf of the newspspapers to run ads for their clients.  Very few, if any, agencies still collect the generous 15% from their clients anymore and so media vehicles who still quote rates in gross are merely creating continued opportunities for rate discrepancies and confusion.  Net is already the standard in new media; traditional media needs to catch up!

Calculators will survive so now is the time to eliminate this outdated system.

Since I took a left and moved out to the coast
From time to time I find myself engrossed
With other erstwhile denizens of the apple
While we sit around and take L.A. to task
There's a question someone's bound to ask
And with this complex question we must grapple

Do you miss New York
The anger, the action
Does this laid back lifestyle
Lack a certain satisfaction

Do you miss the pace
The rat race, the racket
And if you had to face it now
Do you still think you could hack it

When you're back in town
For a quick look around, how is it
Does it feel like home
Or just another nice place to visit

Do you miss the strain
The traffic, the tension
Do you view your new terrain
With a touch of condescension

Do you miss the scene
The frenzy, the faces
Did you trade the whole parade
For a pair of parking places

"Do You Miss New York" lyrics by Rosemary Clooney